The Wall Street Journal reports that the 0.83% departure rate per month is the highest on record since this started being tracked in 2001. 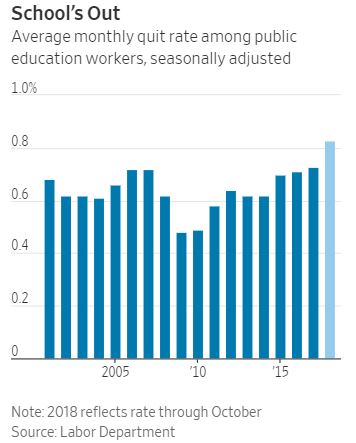 This tends to happen in teaching.  In 2009 when the economy was first started coming out of a very deep recession, the rate of teachers leaving was 0.48%.  People go into education when the economy is bad and stay there.

But this is more than just the economy at full employment – this is also about millenials and gen x/y – they switch jobs and careers more often than baby boomers who tended to stay in one job.

So – teachers a leaving because this generation is not as connected as previous generations and with a great economy and low unemployment, teachers are leaving at greater rates.

That means – there are great teaching jobs out there right now and we need more programs that help people get into the classroom quickly and efficiently.