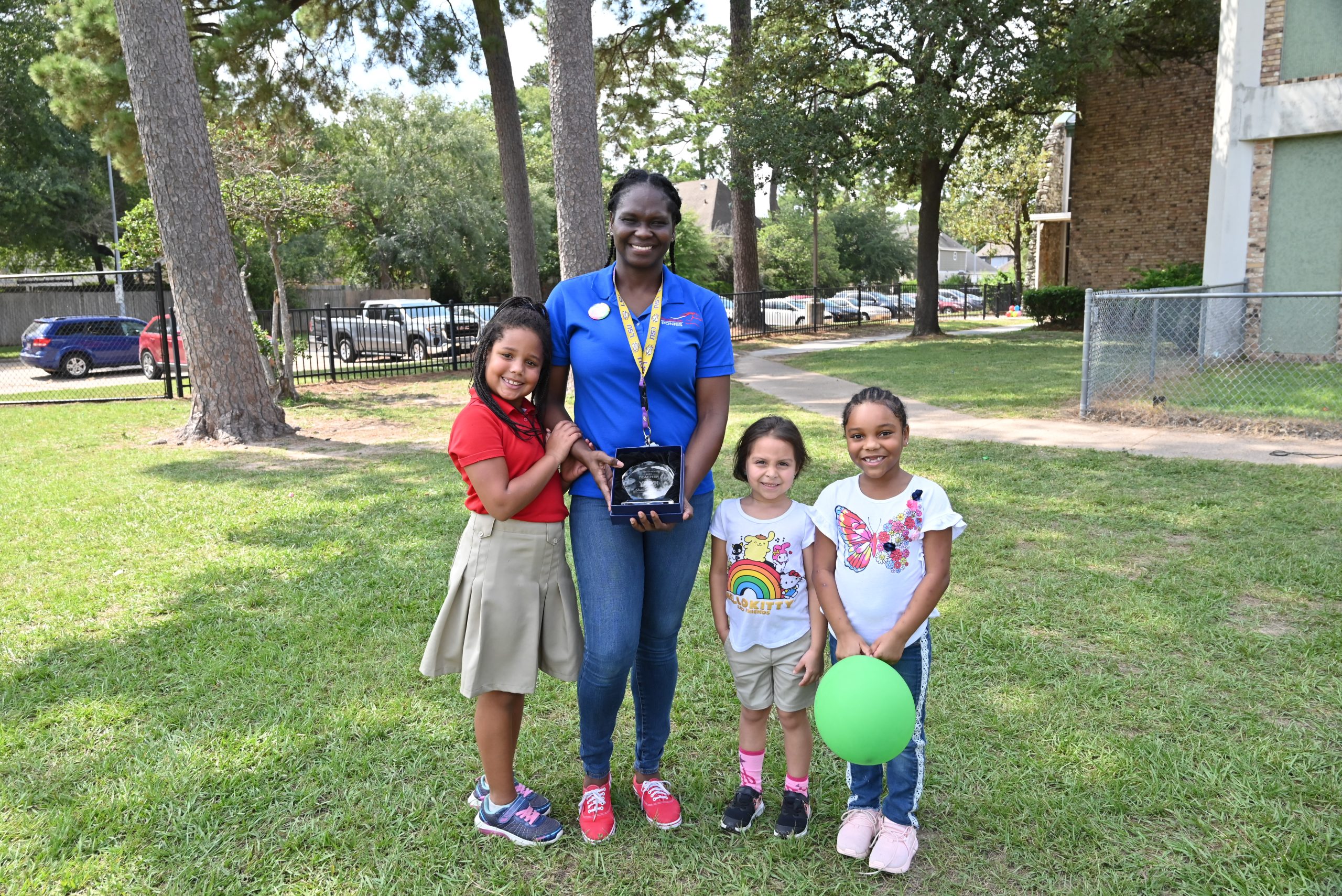 It had been a month since Houston Life, Teachers of Tomorrow, and the Ponderosa Elementary School staff conspired to surprise Shanekia Hall with the 2022 Teachers of the Tomorrow Teacher of the Year Award before school was officially in session.

So it was only right that all involved in the surprise met up again in September to honor Shanekia for winning the award and $5,000 prize as a first-year intern teacher. This time, Shanekia was able to celebrate with both her current class and her students from last year.

The energy around the building was electric!

Shanekia’s enthusiasm for her job and ability to connect with her students, whether in the classroom or on the playground, was clear. Shanekia has found her true calling as a kindergarten teacher.

“I’m very passionate about my job, I teach from the heart, I help from the heart,” said Shanekia, who was still getting to know her new kindergarten students during the day of the celebration after recently returning from maternity leave. “There are things that I don’t know and that’s always why I seek guidance so that I’m getting it right to support the students.”

Shanekia thrived during the 2021-22 academic year as an intern teacher. She instantly bonded with her students, provided them with a safe space to learn and grow, and made learning fun for them.

Shanekia credits not only the support she receives from the leadership at her school and Spring Independent School District but also the continued support from Teachers of Tomorrow.

“There are individual specialists at the school, we make certain that they have a mentor at the school that is working with them. So once again, it’s an educational village for them to be successful.”

Houston Life correspondent Melanie Camp had an opportunity to speak with some of the students, giving them a chance to talk about what they like about Ms. Hall.

“She is the best teacher I’ve ever had for the first day,” one student said.

“She was fun and she let us play activities,” another student said.

Shanekia says she was inspired to teach by teachers who had believed in her and encouraged her during her childhood. She sees teaching as an opportunity to pay it forward.

And from the sounds of it, Shanekia is doing just that.

When Camp asked one of the students what does she wants to be when she grows up, the student replied, “a teacher.”

“Is that because of Ms. Hall?” Camp asked.

Shanekia always knew teaching was her true calling. Teachers of Tomorrow made her dream a reality. The non-traditional, self-paced online certification program allowed her to balance work and family life while working toward the goal of having her own class.

“You can actually work in your job right now and complete the coursework on your own time,” Shanekia said. “That was really important to me, that’s what sold me because I was actually working but I knew in my heart that I actually wanted to be a teacher and I belonged in the classroom.

“My daughter is on the spectrum, she has Autism and I had to balance being a mom, working, and getting certified to be in the classroom at the same time. So everything worked out perfectly.”

Ponderosa Elementary School officials have enjoyed Shanekia and appreciate the passion and enthusiasm she brings to teaching and her students.

“It is a very difficult job,” said assistant principal Natalie Johnson, who is also a product of Teachers of Tomorrow. “As I told Ms. Hall earlier, … she is an exemplary model. We are proud that she is a Ponderosa champion.

“Our culture here … all of the roles are blurred because we all support one another,” Johnson continued. “This is a fabulous school community and I’m happy to be the assistant principal here at Ponderosa Elementary.

“Never underestimate the heart of a champion.”